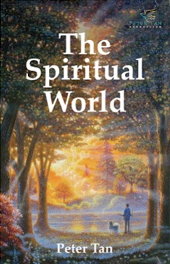 Written by Pastor Peter Tan after some spiritual experiences in March 2006, aims to prepare us for life in the Spiritual World after our earthly departure.

Between mid-February 2006 to the end of March 2006, Pastor Peter Tan was taken into the Spiritual Word through nightly visions and visitations by the Lord Jesus Christ. This book is a summarized compilation of the understandings that he has received during the supernatural visitations. He was given to understand that this book would provide some guidance about the Spiritual World, of heaven and hell, to those still alive on the earth so that they would better prepare themselves for the Spiritual World.

Since 1979, he had prayed consistently for an opportunity to visit heaven so that he might be able to teach and equip the people of God for life in heaven. Although he was given glimpses of heaven in his many spiritual experiences, the visitations that he received in 2006 were the result of 27 years of consistent prayer for the opportunity to visit heaven and be able to tell others what it is like. This book is but a small part of all that the Lord has shown him during the visitations.

Discover the different Spheres of the Spiritual World.
What are the Higher Dimensions like?
Life After Death!
How Things in Heaven affect the Earth?
And much more secrets revealed in Visions from God Himself!

A similar account of the Spiritual World is also found in “The Visions of Sadhu Sundar Singh of India”:
=> http://www.greatgenius.com/the-visions-of-sadhu-sundar-singh-of-india