> Evidence that Jesus Existed and How He Looks

« The One True God and Christ His Manifestation

The Atmospheric Presence and the Knowing-Light »

Evidence that Jesus Existed and How He Looks

Evidence that Jesus Existed and How He Looks

This is a quote from Josephus, from his historical first-century writings entitled, “Antiquities Of The Jews,” Book #18, Chapter 2, section 3.

Now there was about this time Jesus, a wise man, if it be lawful to call him a man; for he was a doer of wonderful works, a teacher of such men as receive the truth with pleasure. He drew over to him both many of the Jews and many of the Gentiles. He was [the] Christ. And when Pilate, at the suggestion of the principal men amongst us, had condemned him to the cross, (footnote here says: A.D. 33, April 3). those that loved him at the first did not forsake him; for he appeared to them alive again the third day; (footnote here says: April 5). as the divine prophets had foretold these and ten thousand other wonderful things concerning him. And the tribe of Christians, so named from him, are not extinct at this day.

This is a reprinting of a letter from Pontius Pilate to Tiberius Caesar describing the physical appearance of Jesus. Copies are in the Congressional Library in Washington, D.C.

A young man appeared in Galilee preaching with humble unction, a new law in the Name of the God that had sent Him. At first I was apprehensive that His design was to stir up the people against the Romans, but my fears were soon dispelled. Jesus of Nazareth spoke rather as a friend of the Romans than of the Jews. One day I observed in the midst of a group of people a young man who was leaning against a tree, calmly addressing the multitude. I was told it was Jesus. This I could easily have suspected so great was the difference between Him and those who were listening to Him. His golden colored hair and beard gave to his appearance a celestial aspect. He appeared to be about 30 years of age. Never have I seen a sweeter or more serene countenance. What a contrast between Him and His bearers with their black beards and tawny complexions! Unwilling to interrupt Him by my presence, I continued my walk but signified to my secretary to join the group and listen. Later, my secretary reported that never had he seen in the works of all the philosophers anything that compared to the teachings of Jesus. He told me that Jesus was neither seditious nor rebellious, so we extended to Him our protection. He was at liberty to act, to speak, to assemble and to address the people. This unlimited freedom provoked the Jews — not the poor but the rich and powerful.

Later, I wrote to Jesus requesting an interview with Him at the Praetorium. He came. When the Nazarene made His appearance I was having my morning walk and as I faced Him my feet seemed fastened with an iron hand to the marble pavement and I trembled in every limb as a guilty culprit, though he was calm. For some time I stood admiring this extraordinary Man. There was nothing in Him that was repelling, nor in His character, yet I felt awed in His presence. I told Him that there was a magnetic simplicity about Him and His personality that elevated Him far above the philosophers and teachers of His day.

Now, Noble Sovereign, these are the facts concerning Jesus of Nazareth and I have taken the time to write you in detail concerning these matters. I say that such a man who could convert water into wine, change death into life, disease into health; calm the stormy seas, is not guilty of any criminal offense and as others have said, we must agree — truly this is the Son of God!

Your most obedient servant,
Pontius Pilate

The following description of Jesus Christ was written by Publius Lentrelus, a citizen of Judea in the reign of Tiberius Caesar. It first appeared in the writings of Saint Anselm of Canterbury, 11th century:

There lives at this time in Judea a man of singular virtue whose name is Jesus Christ, whom the barbarians esteem as a prophet, but his followers love and adore him as the offspring of the immortal God. He calls back the dead from the graves and heals all sorts of diseases with a word or touch. He is a tall man, well-shaped, and of an amiable and reverend aspect; his hair of a color that can hardly be matched, falling into graceful curls, waving about and very agreeable crouching upon his shoulders, parted on the crown of the head, running as a stream to the front after fashion of the Nazarites. His forehead high, large and imposing; his cheeks without spot or wrinkle, beautiful with a lovely red; his nose and mouth formed with exquisite symmetry; his beard, and of a color suitable to his hair, reaching below his chin and parted in the middle like a fork; his eyes bright blue, clear and serene. Look innocent, dignified, manly and mature. In proportion of body most perfect, and captivating; his arms and hands delectable to behold. He rebukes with majesty, councils with mildness. His whole address whether in word or deed, being eloquent and grave. No man has seen him laugh, yet his manners are exceedingly pleasant, but he has wept frequently in the presence of men. He is temperate, modest and wise. A man for his extraordinary beauty and perfection, surpassing the children of men in every sense. 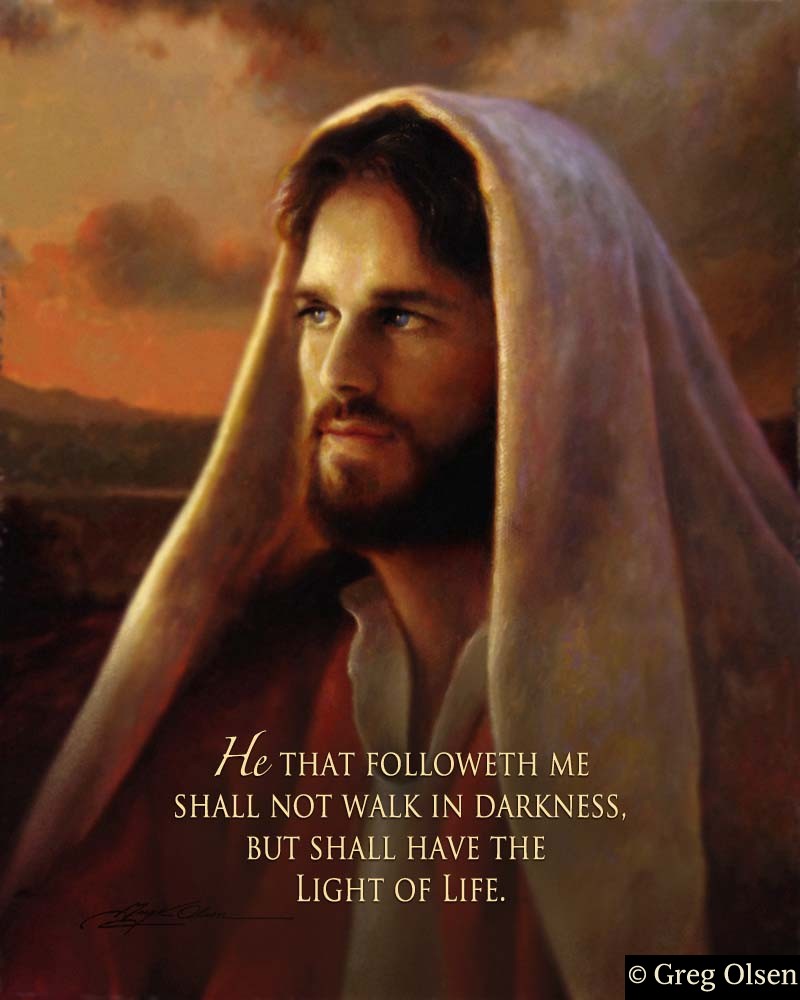 “There are many people who wonder why most pictures of Jesus show him to look like a white man, and that he should look more like a black or a Jew. The truth is, Jesus is not a white man, black man or any race of that matter. Jesus birthplace and nationality is Jewish, but he was not conceived by human seed but by the Holy Spirit, and therefore he does not possess the genetics of the fallen Adamic Race. It is medically proven that the placenta creates its own blood, and the mother only provides food to it. Jesus blood is pure. Jesus is the New Adam. Jesus is the Perfect Man which consists of the best qualities of all races.”
- Enoch Mind Reality